Not long ago we were telling you how much we like adding new competitions to Blinkfire. However, there’s something we like even more: adding new sports! After traditional pastimes such as football, basketball, golf or tennis, we decided to take the leap to new technologies and added eSports or competitive games to our system.

The first videogaming competitions took place in the 1970s, but eSports have become popular in the last decade thanks to the boom of online gaming. Today, teams play professionally and sponsors are investing more and more money to reach their large base of followers.

According to recent data from NewZoo, eSports are growing at a 40% annual growth rate and they are expected to reach 765 million dollars in 2018. Half of that will be online advertising. Matches and competitions can be watched on TV and online streaming services and the number of viewers is close to 250M and expected to surpass 300M in the next three years.

The term eSports encompasses a multitude of different events, genres and games (real-time strategy games, first-person shooters, fighting games, etc.). At this moment we have added teams from one of the most popular current games: League of Legends, developed by Riot Games. DOTA 2, Starcraft II or Counter-Strike: Global Offensive are some other prominent IPs. 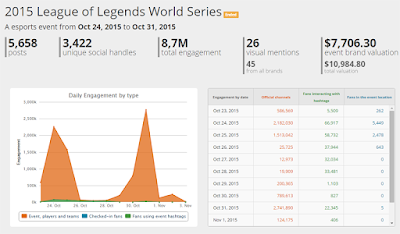 But the truth is we didn’t select League of Legends just because of its huge popularity. The 2015 League of Legends World Series were held in October and we used our tools to track the patterns and effects of the event on social channels.

We only tracked the semifinals and the four teams that reached this stage of the tournament, but it was more than enough to see for ourselves how extremely popular eSports are and how brands such as Coca-Cola, American Express, Monster or New Balance are investing in this unconventional sport. In just a few days our system gathered over 5,600 social posts related to this event (by hashtag or geographical location), from over 3,400 users, and with 8.7M engagements.

Seeing these figures, investing our efforts in eSports is a no-brainer, therefore in the following weeks we plan to expand our tracking to add the most important teams, players and sponsors of this new and exciting industry.