There are not many rivalries in football (er, soccer) that can compare to that between Real Madrid and FC Barcelona. Any game between the two Spanish teams becomes a world-class event and, as such, it also has an important impact on social media and serves as a showcase for numerous brands and sponsors.

For the recent league match between the two clubs, held on November 21st, we created an event to track that media exposure and measure the impact of el Clásico on social networks. 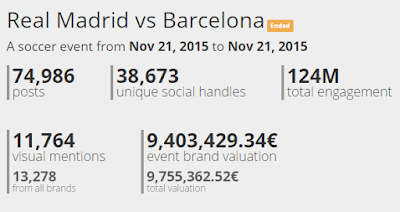 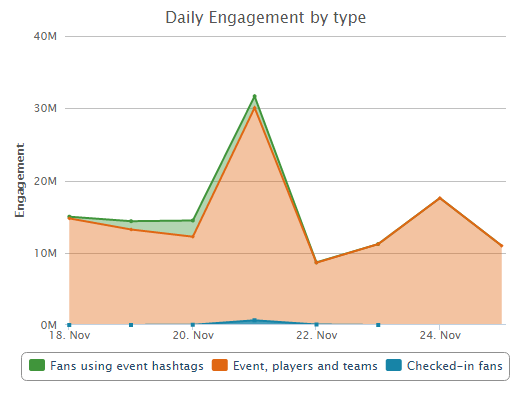 As expected, official channels are the ones gathering the most engagements, particularly on the day of the event. It was also expected that posts from fans at the event location and the engagement obtained by them grew the day of the match. In this case we went from 19,106 and 25,283 engagements inside the Santiago Bernabéu on the days before the match to 653,090 on the 21st.

You can also see that the engagement from fan posts including the official hashtags fades as fans stop using these hashtags.

Sponsors for both teams are the primary beneficiaries of all this media exposure. According to our data, brands related to the event got social engagement valued in €9,403,429 (that’s approximately $10 million or £6.6 million).

After reviewing these figures it is apparent  that El Clásico has a massive presence on social media and that it offers a very valuable visibility to the brands involved in the event. Blinkfire Analytics and our tools can track and measure that visibility, providing teams with more accurate data to negotiate their sponsorship deals and make sure they don’t leave social and digital media out of the equation.