When it comes to shirt sponsorships, size doesn’t matter; but placement does

Today sponsorships are just another element in any soccer team jersey, but 40 years ago it was something frowned upon. Do you know which was the first soccer club that dared to do it in a European league? It was the Eintracht Braunschweig, from Germany. They placed the logo of popular liqueur Jägermeister on the front of their shirts. The German football association denied the club’s request, but the team just replaced their traditional logo with the Jägermeister stag. Pretty clever if you ask me.

The first English team that had a shirt sponsor was Kettering Town, from the English Southern League, that was sponsored by Kettering Tyres. When league officials ordered them to remove the brand’s name from their uniforms they removed just the four last letters and said that “Kettering T” stood for Kettering Town. The league didn’t buy it and the club had to remove the rest of the brand’s name after being threatened with a hefty fine. Just one year later jersey sponsorship was approved in English football.

Jump ahead to 2015 and we face a very different reality. Sponsorships are now a major revenue source for sports clubs throughout the world. Even those clubs that remained reluctant to “defile” their shirt have finally given in to the bulky figures brands are offering. Advertising is no longer limited to the chest of the players. Some teams place brand logos on the back of their shirts, on their shorts, socks or even on training kits, as we told you last week. 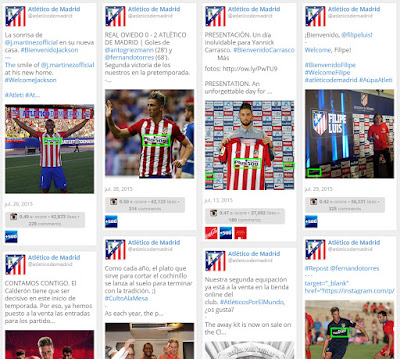 However, the front of the shirt still has a prominent role and it is not by chance. It is, by far, the part that gets the most exposure, both on television and social media. This is something we have seen first hand here at Blinkfire Analytics. One example: last season Atlético de Madrid carried on the back of their shirt the logo of the investment platform Plus500, while the front of their shirt was for Azerbaijan: Land of Fire. This season Plus500 appears on the front of their uniform and they are getting far superior engagement figures.
If we take a look at the data of the last week, Plus500 is the 7th brand with the most engagements on social media, right there with apparel providers like Adidas, Nike or Puma and with powerful sponsors such as Qatar Airways (FC Barcelona), Emirates Airlines (Real Madrid, Arsenal, Milan, PSG…) or Yokohama Rubber. This Japanese brand, the new main sponsor for Chelsea, is another example of a sponsor with a huge positive trend. And if we take a glance at the data in the Financial Services category of our Brand Leaderboard, Plus500 leads the chart as the brand with the most engagements in the last 30 days, ahead of Barclays, English Premier League sponsor, or even BBVA, Spanish La Liga main sponsor. In this same chart we can see another example of a jersey sponsor that has been getting lots of impacts in the past weeks: Kutxabank, new sponsor for Athletic de Bilbao, winners of the Spanish Supercup against FC Barcelona. 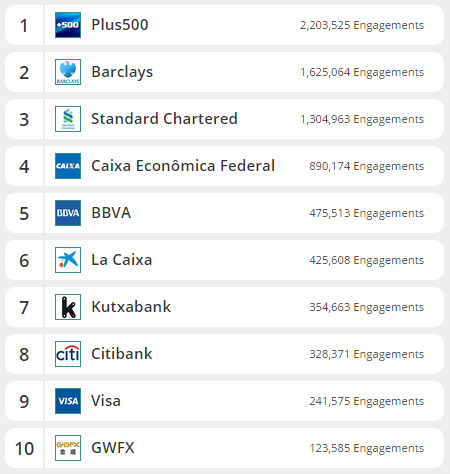 Sports sponsorship is an investment. Brands pay sports teams in exchange for exposure. Appearing on the chest of top level players isn’t cheap, but the media exposure brands get from this is huge. At Blinkfire Analytics we detect and value part of that exposure, the part that happens on social channels. Valuation methods used by clubs and brands to measure that social engagement are inaccurate, inefficient and not in real time. BrandSpotter™, our brand detection technology, identifies logos in images and videos shared on social media and calculates the value of that content. Does your brand need a tool like this to negotiate their sponsorship deals? Contact us!