The Value of Training Jerseys for Sports Sponsors

We get to see a lot of trends at Blinkfire Analytics (and if you are a customer, you can too!) – but one that continues to stare us right in the face is the value and exposure sponsors get by being printed on uniforms used for training.   Increasingly, rights holders are selling sponsorships of their training shirts, and this is now significant for a few reasons:

What we mean by that, is in the past, the only time that fans were really exposed to teams and athletes was during the actual game, whether on TV or in the stadium.  Now, largely enabled by social media, we are seeing what the team is doing not only during the game, but before, after, and on their days off.  We see players in training, and we see them relaxing.

For instance, if you happen to be a Liverpool supporter, there’s no shortage of 24×7 pictures and videos of the team at training.  In this example, these players are sporting their training bibs sponsored by New Balance and Garuda Indonesia, who are separate sponsors from their main jersey sponsor of Standard Chartered. This was the first time Liverpool has ever sold such a sponsorship, 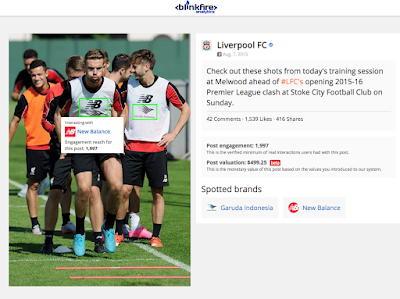 but these posts get a lot of engagement, and it’s not a passing fad.  In fact, in many cases these training posts get more engagement than in-game photos.

Practice shirt sponsors used to be local, but social media has enabled them to be global

The NFL has had sponsors on their pre-season jerseys since 2011. Really?  Yes.   However, because the only people who ever saw them were the people who went to training camps, many were largely local sponsors, that didn’t command a material sponsorship value.   Now, with most teams publishing training camp pictures to global audience, the game has changed.

Certainly, these global brands like Pepsi and SAP run the risk of getting picked up by the media associated with somewhat negative stories,

but where we really see this used to a team’s advantage is when teams like the Minnesota Vikings put their sponsors, in this case, Verizon, front and center in the posts they publish, which is an excellent best practice for actually activating these training jersey sponsorships.

Important to note in the above examples when you look at the engagement and values — increasingly most fans go directly to their favorite teams, leagues, and players for sports news instead of engaging with the media companies.  Again, social media has enabled all teams to become publishers themselves, and in many respects taking the media companies out the equation and enabling direct sell sponsorships into media.

Okay, so what’s the big deal?  Is this really a material issue for clubs?

Yes, indeed, and they know it.  Manchester United, for example, originally had a deal with DHL for £40mm but bought back the rights because they knew they could sell it for more, which they did to Aon as part of a larger sponsorship deal.  Chevrolet is ManU’s main shirt sponsor, but in a recent 30 day period, our systems calculated that Aon actually had a larger earned media value!  (although, to be fair, ManU recently went on a summer US tour that appears have been prominently sponsored by Aon)
And yes, those numbers are millions of US dollars.   That is, if Aon wanted to buy social media ads on a Cost per Engagement (CPE) basis, that’s what it would have cost them on the respective networks to get the same number of engagements (likes, favorites, shares, retweets, loves, etc) that they got organically through ManU’s distribution.
So whether you think sponsoring training shirts is just a normal every day occurrence (like in soccer) or is a gateway drug to the ugliest Winnipeg Jets jersey you’ve ever seen (C’mon SI, my grandma can use Photoshop better than that!) – there’s no denying that the clubs and leagues that can pull it off tastefully will create a new material revenue stream that scales with the world on a 24x7x365 basis.