The FA Women’s Super League: a league of their own

A few weeks ago we announced that the Primera División Femenina was now being covered by Blinkfire Analytics. Today we are glad to do the same with the first division of the Football Association Women’s Super League, better known as FA WSL.

Founded in 2010, nine clubs take part in this league, among them the women’s teams of top clubs like Chelsea, Arsenal, Liverpool or Manchester City. Their presence, and that of their sponsors, led brands like Nike, Vauxhall or Continental to support a league that has a a strong social following.

The ugly truth is that women’s sports currently do not get the same attention from traditional media as men’s sports. However, digital media is leveling the playing field, as consumer choice has democratized content, especially in social media.

The astute sponsors are aware that many WSL players have tens of thousands of social followers and drive a huge amount exposure that brands shouldn’t ignore.  And because many female athletes interact directly with their followers, engagement is high as well. 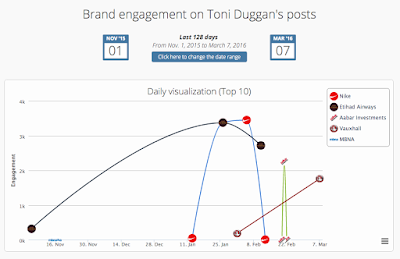 From now on these teams and players will be able to track the engagement they are getting for brands on their social media updates, such as this image shared by Arsenal player Jordan Nobbs which got exposure for Continental:

We have been working hard to add social data for all FA WSL teams and players and we will keep adding data in the next few days. If you have any question or want to give us some feedback, please let us know!