Blinkfire’s 5–4–3–2–1 is a weekly email that comes out every Friday. With all the cool information in our platform, we wanted to spread the wealth with fun, shareable social media posts, content series, TikToks, insights, and more. Enjoy!

5 posts that caught our eye

The past week was full of great content, but these five posts stopped us in our scrolling tracks.

1. FC Barcelona
FC Barcelona is making us feel like we’re in another dimension with this upside down photo of striker Pierre Emerick Aubameyang. Bonus: BrandSpotter™ caught Rakuten on the jersey.

2. Serena Williams
On Tuesday, March 1, Serena Williams announced Serena Ventures’ $110 million fund, and it was oversubscribed. Serena took to her Instagram to let her 14.3 million followers hear the news, posting a video in true boss fashion.

3. 433
Leave it to 433 to give us fun, engaging content of soccer players. Real Madrid FC player Vinícius Junior is deep in training mode, wearing a V02 mask or channeling his inner Bane?!

4. Joey Gallo
With baseball’s future still in limbo, players are taking to social media to find levity in the situation. New York Yankees Joey Gallo made sure his LinkedIn page was up-to-date.

5. Valencia CF
Celebrations all around for Valencia CF. On Thursday evening Valencia CF were the victors over Athletic Bilbao in an exciting 2-1 aggregate win. Valencia returns to the Copa del Rey final — the team’s second in four seasons.

2. Birthdays x Tiff’s Treats for the Dallas Mavericks
Dallas’ favorite Tiff’s Treats can be found on the Dallas’ Mavericks birthday posts — a perfect campaign activation aligning brand + content. Birthdays and treats go hand in hand. This week the Mavs wished a Happy a 23 to 77!

4. Expedia x Liverpool FC
Liverpool FC highlights their journey to the Carabao Cup final not only by the victories earned, but also by the destinations traveled. So, it makes perfect sense this content series is sponsored by none other than Expedia.

Blinkfire’s BrandSpotter™ technology not only spots brand logos and assets in posts, but we’ve trained our AI and CV to recognize scenes. For the non-Blinkfire OGs, scenes are content series such as birthday posts, score graphics, and today’s focus – player arrival.

1. Player Arrival – Memphis Grizzlies
Visiting teams giving exposure to home teams sponsors — it happens quite often. And one scene, particularly in basketball, where we’ve seen this happen this season — the player arrival. The Chicago Bulls jersey patch partner Zenni Eyewear can be found on the player arrival wall, so when Grizzlies players made their entrance into the stadium, Zenni was picked up.

2. Player Arrival – Liverpool Women FC
Basketball and football aren’t the only sports with player arrivals. More and more women’s teams across basketball, hockey, and soccer are including posts of their players arriving for game day like Liverpool Women FC.

3. Player Arrival – Utah Jazz
The Utah Jazz were one of the first teams in the NBA to do branded player arrival posts way back in 2019 with Utah-based clothing company Mr. Mac. Today, the team has upped their game, style, and entrance — nice Bitcoin jacket.

Where would we be without TikTok? The video-sharing platform provides entertainment and laughs — and, yes, we’ll admit, it’s a bit addictive too!

1. Emily Mariko
Emily Mariko, the creator who got our attention last year with her salmon bowl recipe, continues to attract our eyes and stomachs with the food she cooks.

With the many, many data and insights in Blinkfire, we’re giving you one insight every to share — whether on social, at the water cooler, or on Zoom.

1. Meta says “See ya” to IGTV
Wednesday, March 1, Meta announced it will shut down its IGTV app at the end of March as the company looks to “simplify how people create and enjoy videos on Instagram”.

Reels offers short, engaging videos clips, and according to Metas Reels is “the largest contributor to growth on Instagram, as more people watch reels to be entertained, go deeper with their interests, or discover new creators.”

Processing…
Success! You're on the list.
Whoops! There was an error and we couldn't process your subscription. Please reload the page and try again.
Tags | basketball, campaign, content, soccer, social media, tiktok 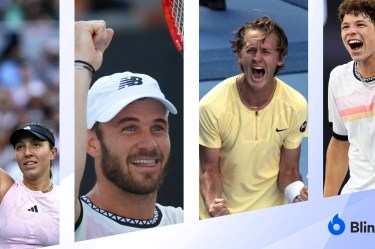 The Stars & Stripes at the Australian Open 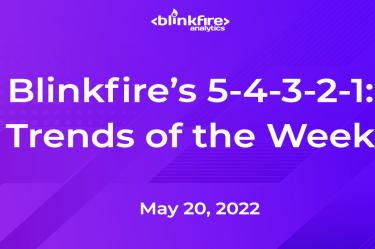 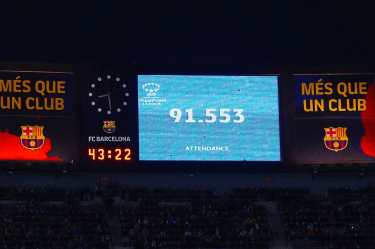