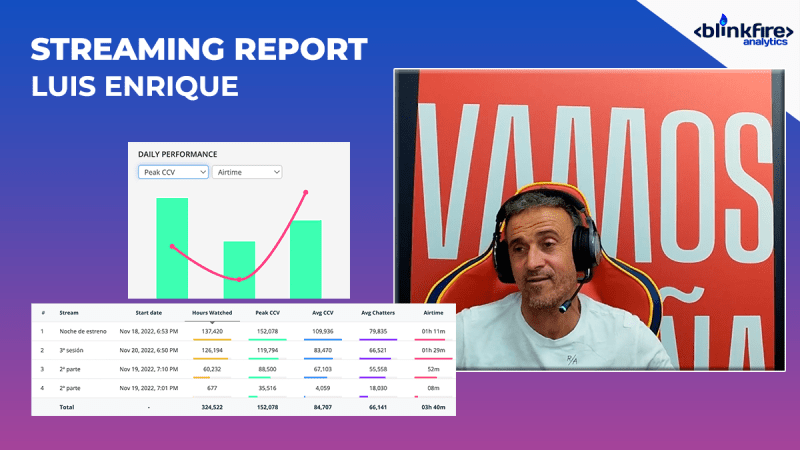 Since November 15, when Spanish coach Luis Enrique announced he would live stream on Twitch during the World Cup in Qatar, his account has gained more than 490,000 followers.

We already know that social networks bring fans closer to their favorite athletes and celebrities, but not all networks are the same. In the case of Twitch, the network has a very young audience. That may be one of the reasons why Enrique decided to embark on his adventure as a streamer: engaging with younger audience and bring them closer to the Spanish national team.

To analyze the impact of Enrique’s Twitch broadcasts, we used Blinkfire’s Streaming Report which shows a detailed view of important streaming metrics like hours watched and CCV.

Twitch has more than 26 million daily active users, and the vast majority are young people between the ages of 16 and 24. This age group accounts for 41% of Twitch users, followed by the 25-34 age group at 32%.

On Friday, November 18, Luis Enrique’s adventure as a streamer began; he managed to gather 152,000 people during the most watched moment of his first stream (also know as “peak CCV in the graph below).

In the hour and eleven minutes that Enrique’s first stream lasted, he averaged nearly 110,000 viewers and more than 79,800 people commented.

This first live stream on Twitch and the subsequent ones have led to traditional media and social network exposure — where content creators like Ibai Llanos, with more than 54 million social media, have reacted to Enrique’s streaming debut.

The success of Enrique’s first stream is reflected by the increase in followers he gained on Twitch on November 19, totaling more than 297,000. That’s a growth rate of 1,802% compared to the previous day when he added more than 15,000 new followers.

On the day Enrique live streamed, which was split in two live streams due to technical problems, the second stream achieved 67,000 viewers, 88,000 viewers at peak time, and more than 55,000 people commented on the chat.

Luis Enrique’s sense of humor and ability to answer even the most uncomfortable questions (about coaching, the team, etc.) has been key to his success. His newfound fame on Twitch has opened the door for other coaches to join in on the fun.

Learn more about how Blinkfire can help you track, value, and report on sponsorship across social media, digital, OTT, and broadcast. 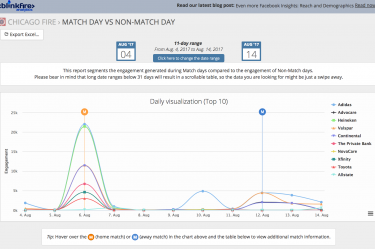 Visualizing Home vs Away Sponsorship data 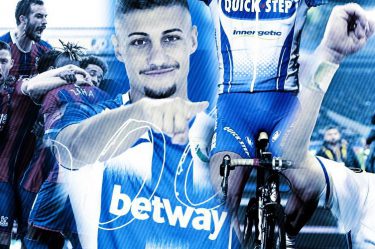 Sports Take A Timeout, But Social Media Stays In The Game: Part 1 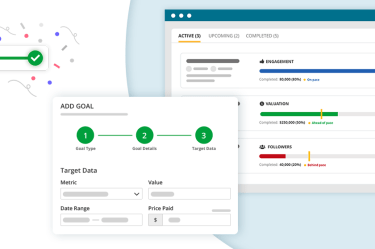